亚单元:
Interacts with ENAH, Abelson murine leukemia virus V-ABL, ABL1, STX1A, SNAP25, VAMP2, and through its N-terminus with WASF1. Part of a complex consisting of ABI1, STX1A and SNAP25. Part of a complex consisting of ABI1, EPS8 and SOS1. Interacts with EPS8, SOS1, SOS2, GRB2, SPTA1, and the first SH3 domain of NCK1 (By similarity). Component of the WAVE2 complex composed of ABI1, CYFIP1/SRA1, NCKAP1/NAP1 (NCKAP1l/HEM1 in hematopoietic cells) and WASF2/WAVE2. Interacts (via SH3 domain) with SHANK2 and SHANK3, but not SHANK1; the interaction is direct. Interacts with the heterodimer MYC:MAX; the interaction may enhance MYC:MAX transcriptional activity. Interacts with FNBP1L (via the SH3 domain), WASF2, and CDC42, but only in the presence of FNBP1L.

功能:
May act in negative regulation of cell growth and transformation by interacting with nonreceptor tyrosine kinases ABL1 and/or ABL2. In vitro, at least isoform 2 and isoform 4 suppress the transforming activity of Abelson murine leukemia virus (v-Abl) after overexpression in fibroblasts. May play a role in regulation EGF-induced Erk pathway activation. Involved in cytoskeletal reorganization and EGFR signaling. Together with EPS8 participates in transduction of signals from Ras to Rac. In vitro, a trimeric complex of ABI1, EPS8 and SOS1 exhibits Rac specific guanine nucleotide exchange factor (GEF) activity and ABI1 seems to act as an adapter in the complex. Regulates ABL1/c-Abl-mediated phosphorylation of ENAH. Recruits WASF1 to lamellipodia and there seems to regulate WASF1 protein level. In brain, seems to regulate the dendritic outgrowth and branching as well as to determine the shape and number of synaptic contacts of developing neurons. 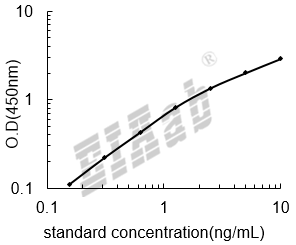