Cancer stem cells are a group of special cells in a tumor that initiate and maintain the development of cancer through self-renewal and differentiation. These cells are equivalent to the "seeds" of cancer, which not only support the growth of tumors, but also promote tumor metastasis and recurrence.

YAP1 protein can promote the growth of lung cancer cells, but the mechanism of action of this protein was not known at the time. Researchers at the Moffitt Cancer Center have found that YAP1 plays an important role in the self-renewal of cancer stem cells.

The study showed that effects of YAP1 were mediated through the embryonic stem cell transcription factor, Sox2. YAP1 could transcriptionally induce Sox2 through a physical interaction with Oct4; Sox2 induction occurred independent of TEAD2 transcription factor, which is the predominant mediator of YAP1 functions. The binding of Oct4 to YAP1 could be detected in cell lines as well as tumor tissues; the interaction was elevated in NSCLC samples compared to normal tissue as seen by proximity ligation assays. YAP1 bound to Oct4 through the WW domain, and a peptide corresponding to this region could disrupt the interaction. Delivery of the WW domain peptide to stem-like cells disrupted the interaction and abrogated Sox2 expression, self-renewal, and vascular mimicry.

The researchers compared the levels of YAP1 and OCT4 in lung cancer and normal tissues. They found higher levels of YAP1 and more interaction with OCT4 in primary and metastatic lung tumors. Patients with high YAP1 levels in the tumor have a worse prognosis than those with low YAP1 levels. These findings suggest that YAP1 can be a potential target for the treatment of lung cancer.

Studies have shown that blocking YAP1 can inhibit stem cell self-renewal, prevent them from forming a blood vessel-like structure, and reduce the growth of lung cancer cells in mice.

"Inhibition of YAP1 function or interference with the binding of YAP1 to OCT4 may have an effective anticancer effect. YAP1 inhibitors are expected to become new anticancer drugs to help people treat lung cancer," the researchers said. 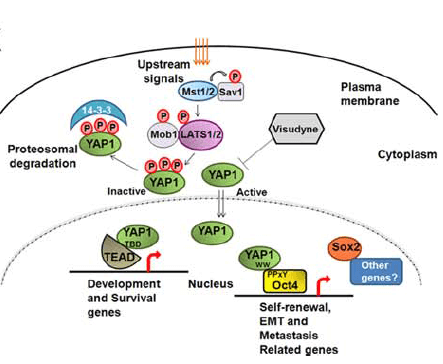